by Buddies on October 8th, 2009 in Uncategorized 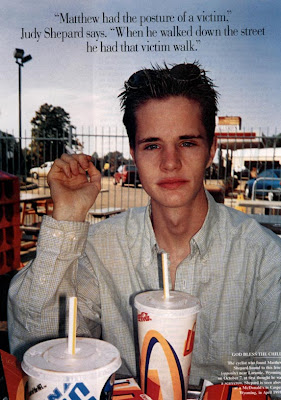 It’s a somber anniversary to mark, but an important one. For many gay teens growing up in the 90’s Matthew Shepard became a hero. His life and horrible death became an inspiration for many of us to come out and speak out and stand-up. Shepard’s death was the inspiration for the hit show The Laramie Project, which was producted at Buddies almost six years ago.

According to cast member Jessica Greenberg importance of this event is monumental. “Ten years is a long time, so there is whole generation that didn’t see the show. The story and the circumstances are as relevant today as they were back then.” Greenberg believes there is a challenge to remounting this production. “Ensuring that this story isn’t a historical artifact, that it’s not a time and place in the past. This is something we are mindful of with our production.”

The performance will begin at 8 pm on October 12, 2009, with doors opening at 7 pm. Bread & Circus is located at 299 Augusta Avenue, 416.925.8898. Tickets will be available at the door only, and admission is By Donation, with all proceeds benefiting The 519 Church Street Community Centre.

Here as some additonal items from different online forums

From our friend at Jeremy @ Shape + Colour.

“When I think of Matthew Shepard I hurt. There is very little separating me from him other than the random elemental geography of where I happened to be born. We were born close to the same time. We lived in small towns in long, wide, open places where the sun set for days. And we were both gay. There but for the grace of God go I…

His legacy to us is both a freedom and a burden. His murder unlocked a societal door and in the last 11 years, for all of our turning, we have not opened it. We do not always carry this weight well. We get lazy, we let shit slide. And each time we don’t stand up for ourselves, we let Matthew bleed a little longer. We let Sean Kennedy wound rip deeper. We let Sean Kennedy fall to the pavement and break a little harder.”

This chilling podcast by Xtra’s Joseph Couture is a series of cold calls to Laramie residents asking their views on Matthew Shepard eleven years later.

Newly appointed gay icon, Kathy Griffin used Prop-8 and Matthew Shepard as a focus for her Norma Gay episode on this season’s My Life On The D-List.