by Buddies on January 25th, 2012 in Uncategorized

Throughout the next few weeks, we’ll be posting a series of interviews between artists who we felt shared something in common but might have initially been unfamiliar with one another. Welcome to First Encounters!

Today, Bleed’s Adam Lazarus and the ladies of Birdtown & Swanville (Settlers) talk about collaboration, being vulnerable and the stuff of their childhood nightmares.

Adam: I used to have nightmares stemming from Return to Oz where my friends and family turned into rock people, would grow 20 feet and be forced into child labour making wire hangers.  I think the wire hanger thing was from the movie Mommy Dearest…  Anyhoo, they say that media can have an effect on the youth.  Maybe even fucks us up.  Um, obviously, right?  Thoughts?

Aurora: Of course. I used to have horrible nightmares about the monsters from the Muppets. Also because of the Muppets, I thought that dogs didn’t talk or play the piano around me because I was doing something that made them feel they couldn’t be themselves. That I was offending them into silence and barking. That being said, the media provides a useful guide for social interaction and hairstyling. I wouldn’t know anything, otherwise. 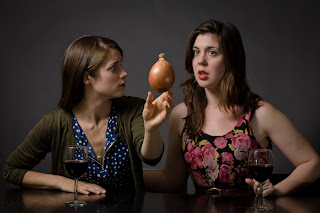 Nika: I wasn’t really allowed to watch TV as a kid, but I did have a recurring nightmare about a giant bird that would swoop in my window, steal my family and leave me behind. Regardless of access to the media, fear is inherent; it must just take form within the limits of our imagination. That is what our play is about!

Now I hate that my dreams take the form of movies – with wide-angle shots and close ups and such. Unless of course it’s a dream about Billy Madison or something. Underrated movie.

Adam: Where do you start when you begin a new project? Collaborators, form, content, a dream in this case…? How do you know, or rather, when do you know, that an idea is worth pursuing?

Aurora: I think we pursue almost every idea we have. Personally, I am terrified that I’ll run out. I think Nika is more considered.

Nika: I think that usually we don’t even realize we have started working on something until much of it has been formed by just hanging out and talking about things that fascinate us both – like for instance, WWE wrestling and pioneers….

Adam: Best part of the creation process, and the worst part?  (Or highlights/lowlights)

Aurora: My favourite part is when I’m alone writing in my apartment with lots of clementines and Kraft Singles at my disposal. That’s when I feel like I’m really on to something, something good. Before anybody ever sees it. After that I have a nervous bile taste in my throat until we close. My other favourite part is when Nika and I and our collaborators have meetings where we discuss all of the hilarious things we won’t do, like having an entire play scored by fart noises.

Nika: There are so many bests. The worst is the stress of worry I suppose. Luckily the bests always outweigh the worsts when it comes to making things you love with people you love.

Birdtown & Swanville: Do you encourage students from your workshops to come and see your work? Why? Why not?
Adam: I love students seeing my work.  I think it’s important for both them and myself.  In a class, students are asked to be vulnerable and open and that is a very difficult demand.  They open up to me and I should do the same in front of them.  Good show, bad show, average show, I’m working it out, just like they are. Only difference is a few more years of experience.

Also, a practical application of a method is exciting for a student to see. Sometimes grasping a concept like bouffon or character can be confusing if you’re only learning it in the confines of a class. These concepts take on new meaning in the realm of professional theatre.

It’s so different being a teacher and being an artist.  Both are extraordinarily difficult.

Birdtown & Swanville: Do you think there is contentment in loneliness? Are people who are relentlessly self-sufficient that way because they don’t trust other people to take care of them?

Adam: With regards to me, I am not a content man when I’m lonely.  I’m quite melancholy.  That being said, I need my lonely times.  I appreciate the dark.  Perhaps not while I’m in it, but I don’t think I would be challenged without them.

I have no idea why people are the way they are, but I do like showing a slice of human trauma on a stage.  We’re all fucked up, let’s celebrate!  We do things for all sorts of reasons, and there is never a clear reason why.  Humans are very complicated.  I don’t think relentless self-sufficiency is mutually connected with a lack of trust.  I think self-sufficient people are independent and exciting and great collaborators.  I think people who don’t trust other people are assholes, are hard to work with, and even harder to have dinner with.  I think people’s stories are fascinating.  Also, that an audience judges a story is fascinating; specifically, what an audience determines as appropriate.  I monitor my judgment and tolerance a lot lately.  I try not to say that so and so did this and that because of this and that which is why they act like this or that.  It takes all kinds. No one is normal. 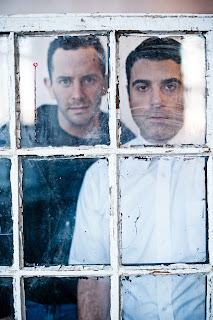 At the core, this is what Bleed is about.  ‘Normal Norman’ is about to do something quite awful.  You’ll want to label him as nuts, stupid, fucked, or inappropriate, and you’re right and you’re wrong.  He is all those things and just a guy who wants to die the way he wants to die.  He’s the captain of his own ship.  He takes the reigns and is happier for it.  Norman is the lucky one.