by Buddies on January 28th, 2011 in Uncategorized

Rhubarb artists Henry Adam Svec (On Livingston’s Method) and MiMo’s Samuel Morgenstein (And Sheep Were Scared…) discuss their work with music, new collaborations, storytelling and the status quo…
Henry Svec: How does your piece approach music? Is the work discovered in the process of performance or will you bring in finished compositions?
Samuel Morgenstein: Our piece is a collection of ideas revolving around a central concept.  We collectively know where the piece should go and where it will end.  Over time, we discover how the journey will unfurl.  This discovery happens during rehearsals and quite possibly during the actual performance as well.  MiMo rarely performs ‘finished compositions’, rather we keep notes of concepts and ideas that are turned into performances. 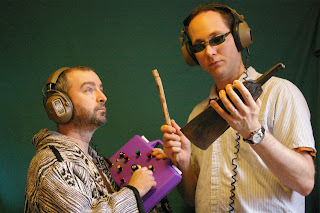 HS: So is the collaborative process part of the work itself?  I mean, is it important for you guys to foreground the organic/improvisatory aspect of your performance, or is it more about the signal/”output”?
SM: The journey is as important as the final destination.  Although we predetermine what sounds will be occurring in the piece, what instruments or objects will be played, and what mood or textures we are attempting to achieve, ultimately improvisation and chance occurrence dictate how these elements will interact.  This is what makes a MiMo performance exciting for both the listener and the performer.
HS: Sounds exciting! So I wonder which aspects of your process you think of in political terms? (Your website mentions the “status quo.”) Which status quo do you see your work in relation to, and how do you define yourselves against it? Do you mean the status quo in music?
SM: We are referring to the status quo in music.  We challenge the mundane nature of most pop music while exploring the musical potential of objects not classified as ‘instruments’.  Although some of our compositions do reflect upon political figures or events (our piece Truth Persists is an homage to Mahatma Gandhi and was performed on his birthday several years ago), we do not consider ourselves overtly political.
HS: Field recording is also something that I’m interested in. Will the field recordings that you’ve made be sources for MiMo’s Rhubarb work? What kinds of things/performances did you record on your trip? 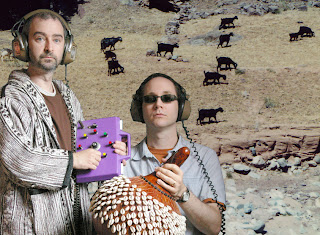 SM: Both Matt Miller and I have traveled extensively compiling field recordings and collecting instruments.  These recordings feature local musicians in India and Morocco, for instance, and also document the sound of trains, chanting, outdoor markets, and anything that sounds distinctive.  We have an extensive archive of recordings that we draw upon.  For our Rhubarb performance, we may utilize some prerecorded water sounds.
HS: For your performance at Rhubarb, MiMo is working with iNSiDEaMiND and video artist Ben Chaisson. How’s that going? Do you have different ways of working when it’s just you versus when it’s a collaboration with other artists or groups?
SM: MiMo often performs with guest soloists to add another melodic component to our performances.  Working with iNSiDEaMiND is a completely different experience as they are a well-defined creative entity with a well-honed performance style.  Working together transports both groups to a different place.  Like all great collaborations, it is necessary to leave the egos behind in order to allow all the artists room for their ideas.  Having the opportunity to work with Ben Chaisson is exciting as we love the integration of visual and musical stimulation.  Multimedia performances can have a very powerful effect on both the audience and the performer.
And now Samuel interviews Henry…
SM:   Do you define yourself as a Musician, a Playwright, an Author, or none of the above?
HS: Maybe just as a storyteller? But I’d probably never say, “I am a storyteller.” I usually just say “song collector” or “folklorist.”
SM: What was your inspiration for the CFL project?
HS: I like Canadian football. I think that the game itself — the rules, the ball, the field, the number of downs, all considered together — is one of the great Canadian artworks. I played in high school and at Mount Allison University when I was in my first year there, so I have been aware of some of the songs and customs that the players have been passing down. When it recently occurred to me that someone should document this living tradition (because this moment coincided with my discovery that a man in the 1970s had tried to do just that), I got down to work. Composer WL Altman helped me to transcribe and decipher many of the songs. At Rhubarb, I will be more interested in exploring ethnographic methods.
SM: What’s your next project going to be?
HS: I’m currently following the footsteps, literally, of the Canadian folklorist Edith Fowke. I’m retracing her field expeditions throughout Ontario and a few other parts of Canada, in order to collect modern but organic variations of the songs Fowke herself captured in her day. I have been surprised by just how far away some of the songs have gotten from their original sources. Anyways, I am building an online archive and releasing an album, and I will do a short lecture and performance tour, maybe, in the fall. The names of some of the performers I have encountered and recorded so far are Laura Barrett, Geoff Berner, Chris Eaton, Al Tuck, Andrew Penner, Tara Beagan, Wax Mannequin, Andrew Sisk, Henry Thomas, Jenny Omnichord, Olenka Krakus, Ron Leary, Andy Magoffin, Andrew Vincent, and Mathias Kom. But I’m not finished yet — I still need to go to Oakville to seek out singers in that area. The album might be two CDs.
SM: What artists or artistic works inspire you?
HS: William Faulkner’s novels are the best, I think. And I often find myself going back to Bob Dylan, Elizabeth Smart, and Harold Adams Innis. Infinite Jest recently kicked my ass. There isn’t much theatre to see in London, Ontario, but the music scene is really good — Olenka and the Autumn Lovers, Bryan Pole, and Handsome Dan and his Gallimaufry are a few of my local favourites. And all the folksinging people I met on my recent field-recording trips were inspiring in an in-your-gut kind of way.
SM: Is it insanity to pursue a PhD?
HS: Yeah, sometimes I think so. But my peers and professors at Western have all been amazing. And I’ve been able to research subjects that I am interested in telling stories about. For me, it has been a good “day job” (although, check back when I run out of funding!). On the other hand, there are lots of other ways to learn and study, obviously, so I don’t know. I’m not sure I would recommend it.
—
You can find more info on The CFL Sessions here, or visit the Buddies website for details of Henry’s show On Livingston’s Method. Samuel can be found online at mimomusic.com and full details of his Rhubarb show, And Sheep Are Scared are on-line here.