by Buddies on February 19th, 2011 in Uncategorized

A note from Mobile Works artist Erin Brubacher. You can mark a spot on her map of Toronto in the Buddies Ante Chamber until Sunday, or catch the culminating presentation of Dear Neighbour: Homecoming on the final day of the festival.

I would like your help in relearning and connecting with this city. Mark a place of significance on the map of Toronto; you’ll find the invitation in Buddies’ Ante Chamber…
Dear Neighbour is an ongoing invitation-based project. The experiments involve taking time, meeting strangers and the city, interrupting the everyday, and elements of chance built in.
An earlier chapter of this project was Bicycle Derive. In July 2010  I followed strangers in Amsterdam by bicycle, selecting them by chance, based on the colours that they were wearing. When each person stopped and got off her/his bike, I approached her/him with an invitation letter in a small envelope. From that geographic point, the spot where I gave the invitation, I waited for the first cyclist I saw wearing the next colour on my list. So, beginning from my own place of residence, I followed a “neighbour” who led me somewhere. I followed and approached the next “neighbour” based on where the previous “neighbour” had lead me. So each invited person determined the subsequent invitation. I didn’t want to choose where I went. I wanted to escape my own habits, judgements and tastes.
Here’s a map of the places where I was led: 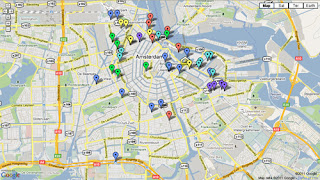 The encounters I had with people were extra–ordinary. They interrupted the process of everyday public life by establishing contact outside of the acknowledged and anticipated contexts for interaction between strangers who share a city…
For Dear Neighbour: Homecoming, the locations of my encounters with strangers and the city will be chosen by you, members of the Rhubarb audience. This performance will conclude with a sort of lecture-performance where I’ll share where I’ve been and what I collect because of where you lead me… Sunday Feb 27th at 4pm. You’re invited.
To contribute to the process, first mark the map.