by Buddies on February 2nd, 2010 in Uncategorized 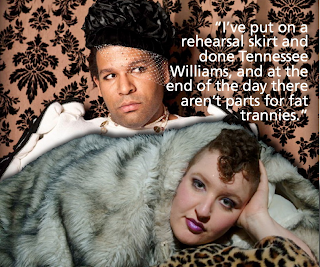 At a fabulously ungodly hour somewhere between the last subway and morning wake-up calls on CP24, self-professed terrible creature of the night and “Tragic Magic” star chatted with “Stadium” ‘s Ryan G. Hinds
RGH: What make up do you use and why? How should your fans create the “Glenn Marla” look?

RGH: Several of the out-of-town artists at Rhubarb are New Yorkers. People often complain NYC isn’t fun anymore, but I find the opposite.

GM: I’ve lived in New York since 2001 and am in disagreement with anyone who says “wah, it’s not fun anymore”. New York has been good to me, and I’ve been good to it. Every single night of the week there is a venue where you can see subversive queer performance art. It’s awesome that everyone gets to play. Yes, let’s have the conversation about gentrification of neighborhoods and people being displaced and art venues closing, but at the same let’s look at what’s popping up. If people don’t like that it’s changing, then leave. Change is a constant in New York.

GM: I’m so excited for Toronto. I haven’t been there since I was a teenager, but I know so many amazing awesome queers who are from Toronto….people I’ve performed with all over. There’s a whole group of fat activists; Chelsey Lichtman and the whole queer conference circuit

RGH: Why do you think people are surprised when they find out big boys and girls can dance or dress well?

GM: They’re not used to seeing us like that because we live in a world where fat people aren’t often allowed to feel empowered in their body or encouraged to go to a dance class. People just aren’t used to seeing larger bodies with not a lot of clothes on. I’ve gotten big tips go-go dancing on a platform where there was space to shock people, and that shock was always positive.

RGH: In Rhubarb this year, there are a few shows that cast their creators as Icons: Yours, mine, Neal Medlyn’s, Rae Spoon’s, and Jess Dobkin’s. What do you think drives us to bring our own lives and experiences to the stage, instead of hiding behind a character?

GM: I went to acting school; I’ve put on a rehearsal skirt and done Tennessee Williams, and at the end of the day there aren’t parts for fat trannies. We have to create art on our own terms. I look at the media, the theatre, the art all around me and I don’t see the lives of me and my people depicted at all. Queer stories are good stories to be telling, and the way we tell them is really special.