by Buddies on February 14th, 2011 in Uncategorized

Montreal’s Anna Jane McIntyre, whose spectacular solo piece And Then There Were 4… plays in Week 2, talks language, philosophy and camp with Ecce Homo’s Alistair Newton (Of A Monstrous Child: a gaga musical – this Saturday at 10pm for one night only). 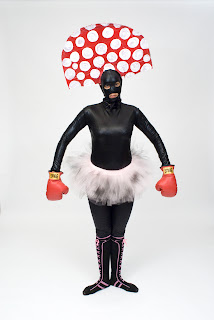 Alistair Newton: Your artist statements are so vivid and poetic.  What role does language play in your work?

Anna Jane McIntyre: Well! Aren’t you lovely!! Language, language, language.  Do you mean spoken language or any sort of language?  I don’t think I trust language much.  It can give the impression that someone is communicating clearly, but there can so easily be miscommunication.  Especially when  people speak the same root language and have different cultures.  The difference in language and meaning are invisible then, and communication can be so skewed.  In my visual work I often use written language, and I am not sure if that is some control issue of planting an idea in the viewers mind. In And then there were 4… there is very little spoken language.  It is mostly driven by other languages, behavioural, proximity, the visuals of object placement and movement and colour.  It’s sort of a collage of recognizable behaviours crammed together with a story feeling linking them, or maybe they are just united by their timeframe.  I guess the language used seems surreal.  I believe in the sense of nonsense, that inuitional knowing that can be grasped and sometimes not held onto.  You know and then you don’t.  Mmmm that said, I love playing with words.  I love reading and writing and listening, I don’t do the first 2 enough. 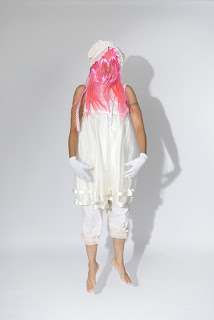 AN: We seem to share an interest in camp.  What role, if any, does camp play in your work?  (Gene Simmons once said that, “it doesn’t have to have good taste, it just has to taste good.”)

AJM: Oh! Hmmmm, by my own definition, I don’t think I use camp.  I think of camp as being emotionally removed from the experience while you are in it.  You are aware of what you are doing and the effect it’s going to have.  I am not making fun.  I am embarrassingly earnest.  My work is more a form of exorcism.  I am not emotionally removed.  I am hoping I don’t cry after each performance!  I’d love to hear how you use camp, how do you define it in your productions?  I definitely use ideas of kitsch.  I have an infinite fondness for cheap glamour.  Probably because I can’t afford the good stuff!! Hee hee, nah, I am happy with my cubic zirconium and rhinestones and sequins and glitter.  I play with ideas of what is feminine with it, since often I equate my understanding of being feminine to being in drag.  I was always a “tomboy” and femininity seemed always mysterious, embarrassing, unreachable and not for me.  I was mistaken for being a boy into my teens.  It took me forever to use any makeup.  Now that I am older, I play with my appearance.

AN: Is your artistic output ruled by a specific philosophy or set of politics? If so, what are some of the artistic, intellectual and philosophical sources that have influenced you?
AJM: O yes. Most definitely.  I have a very specific philosophy and that is….. trust & respect your artistic ideas & process, don’t half-step in seeing them through.  Welcome failure.  Assess failure.  Accept and work with your contradictions. Be generous.  draw from all parts of your life experience. Don’t protect yourself.  Draw always.  Don’t leave home without a sketchbook.  Do not analyse your work until it is done.  That may sound like not much, but if you really commit to the idea it can be something.  It means that I am often learning about a new medium to fulfill a project’s requirements, which is how I ended up using performance, learning to weld, learning to work with wood, learning to sew, learning to box, weight lifting etc. It can also mean that my ideas are steeped in a fog of personal language that may not communicate so efficiently.

I am influenced by too-many-things.  First and foremost my parents have had a huge influence on my approach to things, which is very much a) follow your curiosity and b) do-it-yourself.  I think your philosophies are expressed in every single thing you do, so I don’t know if I have separate life/art philosophies.  I doubt it.  I grew up surrounded with an amazingly varied, sometimes eccentric, collection of books that range from how to build your own house to the history of tea and boxing to African and Inuit art to how to be a naturalist, how to be a spy, erotic piercings etc. I also drank a lot of tea.  I cannot downplay the influences of a constant intake of caffeine since I was about 6 since I’m sure this affects you.  To be more specific about how my ideas on art have evolved, here is a list:

This influences list could go on forever!! But I think that is a good start.
photos of Anna Jane McIntyre by Eliane Excoffier