by Buddies on February 10th, 2011 in Uncategorized

Previously on the Buddies’ blog: members of b current‘s r’Aizin ensemble told Nobody’s Business Theatre about the male gaze, board games and where they got their ideas from.
And now the thrilling conclusion, where Johnnie Walker and Morgan Norwich have the table turned on them:
bcurrent: What was the creative process like working as an ensemble? And how did this differ from working individually? What were the challenges?
Johnnie Walker: It’s been a much sillier process than what we’ve been used to in the past. For one thing, it’s obviously involved playing Dream Phone a fair bit. And it’s also involved a lot of people coming over to mine and Adam’s apartment for pancakes or stew or a bottle of wine, which has been quite lovely. Our mission statement for this show is that it be fun to make, fun to perform, and fun to watch, and I think that, so far, we’ve succeeded. It doesn’t feel so much like working on this ensemble theatre piece as doing a middle school science project with a bunch of your friends.

bcurrent: Where did the idea for using this (girls’) dating board-game come from? Where can we buy this game?

JW: Morgan and I are actually co-owners of a pretty sweet collection of girlie games (aka Heteronormative Reification Games) including Dream Phone, Girl Talk, and Perfect Wedding that we inherited from a good friend when he moved to China. For years, we’ve been bringing them out at parties, or having girlie games nights where we would play the games and watch Teen Witch or The Craft. The thing about these games that fascinates us is that while they’re terrible in so many ways–they basically train girls to compete with each other ruthlessly for their ability to find a man and marry him the fastest, hopefully screwing over their girlfriends in the process–they’re also pretty addictive and tremendous fun to play.
There were a few ideas tossed around about doing a project based on Dream Phone, which we feel is the most iconic game: a documentary to track down where all the Dream Phone boys are now; a new version of the game featuring the real names and phone numbers of all our Toronto crushes. But we’re not really filmmakers or game-designers, so we made a play instead. As for getting yourself a copy of Dream Phone, I’d recommend checking out eBay or Value Village. Don’t be fooled by a recent update of the game with cellphones in which the goal is to co-operatively plan a party. These games are only fun when they are mean.
Morgan Norwich:  Way more fun.  In fact, a little while ago there was sort of a girlie game resurgence and I found a new game called Girl Talk Jenga at Toys R Us.  Girl Talk Jenga is just Jenga except it’s painted pink and is kinda mashed-up with the old game Girl Talk, which was a Truth-or-Dare style game that made you do really gross things like eat a spoonful of cinnamon and then reveal embarrassing secrets about yourself.  Which sounds amazing, right?  So I shelled out the $25 for it and brought it home for us to play, but it turns out the Girl Talk aspect of it has been reinvented to have a more…positive impact on girls, I guess?  Now the Truth questions are things like, “What’s your favourite website?” and “What do you like most about yourself?”  and the Dares have been eliminated completely.
Turns out Self Esteem Jenga is way less fun than making your friends degrade themselves.  So we fixed Girl Talk Jenga.  We had a party where guests were encouraged to write better Truth of Dares on the Jenga blocks with a Sharpie marker, and now when we play it we get Dares like “Put your mouth on something alive” and Truths like “What do you hate most about your best friend?”  Way. More. Fun.

bcurrent:  Morgan, what was it like being the sole woman in an ensemble full of men?

MN:  It’s something that’s become fairly old-hat for me ever since I started emceeing shows for the all-male burlesque troupe Boylesque TO.  I’m used to being one of the guys, albeit one of a particular type of guy who likes to wear lipstick and glitter.  I think my role in the ensemble has been to offer a female perspective and to be an undeniable female presence.  It was really important to me with this project that it be clear that we are taking the piss out of these strange female rites of passage, not taking the piss out of women.  And while I don’t want to say exactly what my role in the performance is, cuz it’ll ruin the surprise, I can pretty confidently say that I am bringing an undeniable female presence to this slumber party, and showing these guys that the games they so longed to play and the “girl stuff” they so wanted to do were really just plain nasty. 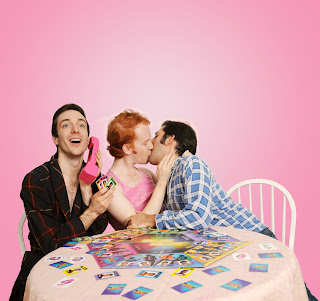 bcurrent: What was it like working with these men using images traditionally associated with young women?
MN:  It’s been really fun seeing how the guys imagine and embody what goes on at a tween girls’ sleepover.  I have lots of memories– horrible, hilarious memories– of going through all that stuff that I’ve shared with the guys.  For example, an old diary of mine full of “spells” my friends and I planned to perform has been excellent source material.  And actually watching the guys take all these girlie games and images and ideas and make them their own has given me a fun perspective on it all– the idea that there are these boys who actually envied and wanted to experience all the ugly stuff I was going through as a teen girl.

bcurrent:  Who do you have a crush on?
JW: Not to toot our own horn, but I kinda have a crush on everyone in our show. It’s like a Who’s Who of Cute. Or should that be a Who Who Who’s Who’s Who of Cute?
MN:  There are a lot of crush-worthy artists in Rhubarb this year.  I have a monster crush on that Henry Adam Svec who’s doing that CFL folk music piece.  Dreamy.
You can catch the r’Aizin Ensemble’s The Beauty Project: the male gaze and Nobody’s Busniess’ Who Who Who’s Got A Crush on You (A Slumber Party for Boys) at the 32nd Rhubarb Festival – click the links for full programming info.