by Buddies on October 22nd, 2009 in Uncategorized 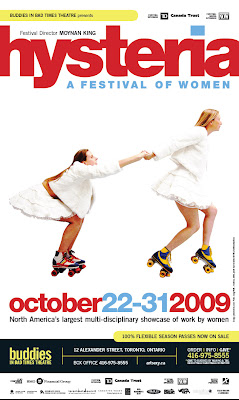 Diversity is the key to hysteria, the women’s performance event that festival director Moynan King’s organized since its 2003 premiere.

“The festival has always emphasized a cultural and stylistic cross-section,” says King, a Buddies associate artist.

“Toronto doesn’t have a women’s performance community, so Hysteria both allows me to program work I admire and to allow artists to meet each other.”

Hysteria is a unique Canadian festival; other women’s festivals, such as Winnipeg’s FemFest, focus on theatre.

“Performance isn’t the same thing. In Hysteria, participants don’t use an established style, but rather invent the form as they invent their work. They can create a style that suits themselves.”

As in the past, this fifth Hysteria is a mix of group evenings and solo shows. The performers are mostly Canadian, but King feels it’s also important to have international representation.

Among the visitors are New York spoken word artist Staceyann Chin and Sweden/German duo Anna Berndtson and Irina Runge, who bill themselves as TBL (TallBlondLadies).

The TBL presentation is in association with FADO Performance Art Centre; in addition to the hour-long show at Buddies (October 24), FADO hosts a five-hour performance piece at YYZ Gallery (October 26; see performanceart.ca).

Chin (October 23) is an activist who “puts herself on the line. I was shaken the last time I heard her read; she’s simultaneously vulnerable and powerful. Staceyann is remarkable in the way she can take her own experience and create compelling, empowering art. It’s so different from the old-school, victim notion of feminist performance.”

But don’t forget the Canadian contingent, with performances by, among others, Shawna Dempsey (October 24), Carmen Aguirre (author of The Refugee Hotel, October 27) and Sharron Matthews (October 28). Also check out Gaggle (October 23), a group piece that explores female dynamics and competition, directed by Karin Randoja and choreographed by Alisha Stranges.

One highlight will be a workshop of Spin (October 25), Evalyn Parry’s look at the bicycle “as muse, musical instrument and instrument of social change.”

“It’s an amazing piece of unknown feminine history,” notes King. “One of the characters is Anna Londonderry, who biked around the world in 1895. She was funded by advertising, including placards on her bike and body promoting bottled water.”