SKOOL: Out Of Line

by Buddies on February 16th, 2010 in Uncategorized 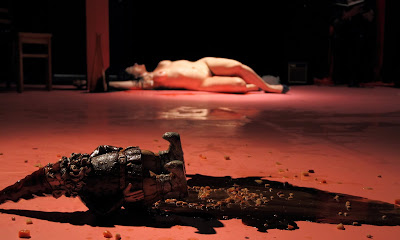 Transgressing the Abject in Art: Out of Line Theatre’s Le Petit Mort

Throughout the narrative, death and orgasm—erotic and explicit sex—come to the fore, juxtaposing feelings of loss and remorse with that of physical pleasure. Bataille, known for his borderline pornographic prose, undoes notion of censorship to get down to the strange and unexpected reactions the body has to death. Out of Line Theatre’s response to Bataille will be graphic and confrontational, but should provide some insight into the often-blurred binary of art/porn. Indeed, how do we confront this contradictory binary, taking into the light the history of theatre and art in general?
Le Petit Mort runs as part of the Rhubarb! Festival from February 17th to 21st at 9pm and features Out of Line’s Mia van Leeuwen working through the filth and eroticism of Marie. Director and co-creator Ian Mozdzen, as well as van Leeuwen, will demonstrate the power of the body in theatre in its most raw, sensual, and abject form.
BG