by Buddies on February 22nd, 2011 in Uncategorized

TOP 5 PLACES IN TORONTO TO START A REVOLUTION
from Small Wooden Shoe, whose Upper Toronto Community Consultation and Working Dinner caps off the final day of the 32nd Rhubarb this Sunday – come early to catch the culmination of two Mobile Works (Maggie Flynn’s News Commutes and Erin Brubacher’s Dear Neighbour: Homecoming) and an open discussion with Glasgow-based performance artist Adrian Howells, addressing topics of intimacy, vulnerability and risk as it relates to artist, participant and audience. 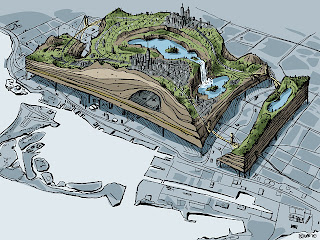 1. City Hall
This is the obvious one. A key revolutionary doctrine is that if you cut off the head, you will slay the beast. A well-timed strike at City Hall, ideally when the Chief of Police is presenting to the council, offers an excellent opportunity to sow chaos in the mechanisms of power. You can capture the people running the show and then take advantage of the confusion to put your dastardly plan into action.
Beware! This is not a place you can fortify and hold. Though the high tower and broad open Nathan Phillips Square might seem to provide an excellent field of view for lookouts, remember that the entire north side of the building is a windowless blind spot. It offers far too easy an approach for the police forces that are located just a few blocks away.
2. CN Tower
Now this is a place you can fortify. The key to defending a fortified position with a small group is tight control of how the enemy can move into your space. With limited entrance and egress, the top of the CN Tower provides an excellent opportunity for a small well-equipped force to take and hold. Simply disabling the elevators leads to a situation where opposing forces must climb a marathon number of stairs to reach you. The elevation and telecommunications infrastructure make it easy to make your message seen and heard. Hang a banner and start broadcasting 24/7!
Resupply is an issue, though some of that is mitigated if you can secure the restaurant’s larder. Ultimately, this is a symbolic position. If you do not have compatriots on the ground ready to go when things kick off, your isolated occupation will quickly come to an end.
3. The Annex
When Napoleon III became Emperor, he hired Georges-Eugène Haussmann to remake Paris into a city that would be spatially less susceptible to unrest. Haussmann widened narrow medieval streets into broad boulevards that would be hard to barricade and easy to cover with artillery and rifle fire. Tehran was built along similar lines, while Cairo was not; a fact which Egypt’s protestors put to good use.
The narrow residential streets of the Annex offer similar opportunities for mob assembly away from the watchful eyes of the state, along with maze-like alleyways for escape and ambush. Because of the relatively affluent residents, the Man is unlikely to deploy tanks and bulldozers to level the area, until the full extent of your plans have become apparent and it is too late.
4. The R. C. Harris Water Treatment Plant
Who says a revolution needs to be ugly and violent? The R. C. Harris Water Treatment Plant is rightly known as the Purification Palace. Its stately clean architecture offers a dignified backdrop from which to make your demands. The fact that it ensures the potability of 45% of the city’s water supply allows you to threaten without making a threat. For decades, evil masterminds have dreamed of lacing a city’s water with LSD. Perhaps you can be the first to actually do it.
The downside of choosing this location is that you are easy to find and there isn’t much of anywhere to run. Besides, sales of bottled water have been on the rise for years. How can you free people’s minds if they never take a sip?
5. The Subway Tunnels
To truly get under the skin of the city, consider the subway system. Here is a place from which to strike hard and fade away into the night. Force the other side to re-ennact the motion-detector scene from Aliens. You can play the alien.