A young femme fatale fucks her way across Europe and through a series of lovers who all wind up dead, until she meets her end at the hands of Jack the Ripper. This is LULU. Based on German playwright Frank Wedekind’s 1894 play, this blood-soaked adaptation tears apart a classic text to create a viscerally sexy and energetic treatise on art, sex, and death in the 21st century.

“a highly stylized and European esthetic… enhanced by heightened, self-aware performances from this impressive cast”

“it’s a provocative, in the positive sense, call and response with an old, dead, white guy that shows how an old play can still be the basis for a useful and artful night at a contemporary theatre, which all theatres ultimately are.”

“Surreal scenography, sublime movement choreography and imaginative costuming combine to create a world that was as vibrant as it was dark and foreboding.” 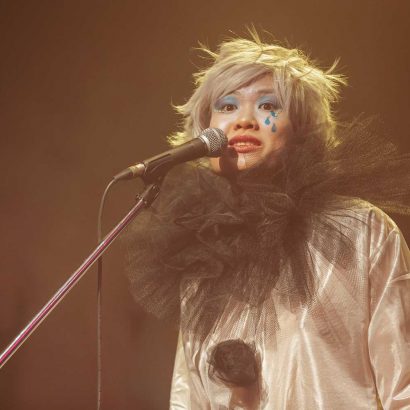 the red light district is an independent Toronto-based theatre-making-thing formed in 2006 with the aim of radically reimagining classic texts (famous and forgotten). Their work has been seen on stages, in parks, found spaces, and sex clubs from Toronto to London to Berlin.

Whether you want to see just one show or keep coming back for more, Buddies has affordable ticket options that are right for you. Many shows have Rush Tickets during the week and Pay-What-You-Can shows every Sunday, and you can save even more when you sign up for Buddies Rewards.