Blind Date, you alluring temptress. I’m in your sexy clutches, yet again.

My first date in that small café, wearing that iconic red dress and even redder nose, was 5 years ago now. Parts of it, I remember as if they had happened yesterday, other parts feel like they happened a lifetime ago. I was a young actor with a sense of adventure who wanted desperately to experience this roller coaster of a show that had affected me so profoundly when I first saw it only a few months prior. I remember looking on in wonder at Rebecca Northan (original Mimi and creator of Blind Date) as she expertly navigated the tight rope of a first date…except, you know, this one was in front of an audience. She juggled so many balls in the air at once – taking incredible care of her date – making him feel instantly at ease and playful and safe to share as much of himself with her (and us) as he chose, providing an always malleable storyline for the two of them to play, and at the same time, honoring who she is by sharing stories and experiences from her life. It was an exercise in connection like I had never seen on stage before. And, all of a sudden, I was sitting there in that seat. I was doing it. I was “dating”. I look back on that first experience with Blind Date, which started in Calgary and, over the course of four and a half months, took us to Des Moines, Edmonton, St. Paul and Winnipeg, and recognize what a crash course it was for me. I learned so much about bravery from every man I picked, I learned so much about failure from some of the choices I made (“failing forward” as Rebecca always says), I learned so much about connecting with and celebrating humans through that experience. I loved all those dates because they said “Yes”, not only to Mimi’s request for a date (which, let’s face it, is kind of integral), but they said Yes to the experience of jumping into the unknown with a sexy clown. I mean, come on – those guys are fucking brave supermen.

So, all of that remains true. What is/was also true about my journey with Blind Date is that I’m gay. I’m totally gay. Yep, I’m Gay (please google Ellen’s Time magazine cover from 1997 to get the full effect). The integrity of my Blind Dates was incredibly important to me, so, of course, I remained as truthful as possible as it related to all of my Mimi’s stories and experiences. But, let’s face it, there was a big part of me that didn’t emerge. First loves, coming out, embracing identity – all these experiences that help shape the person you become were not acknowledged (nothing ends a date faster than a guy finding out the gal on the other side of the table also likes gals). Rebecca and I talked A LOT about the possibility of a queer Blind Date – what it would look like, how/if it needed to change, would there be interest? (That last question was immediately answered as we started getting asked during almost every talk back if we would ever consider picking a woman.) The thought of doing queer Blind Date burrowed in my mind and never left and after finishing our North American tour in 2012, I hung up my fishnets. I knew that in order to continue with this incredible journey, my Mimi needed to be herself, in all her gay and clumsy glory. I can’t properly express my excitement when Rebecca called me last year and told me QBD (what all the kids are calling it) was not only a go, but was being expanded to include David’s brand new clown, Mathieu. AND we were being welcomed with open arms by wonderful friends at Buddies in Bad Times! I’m thrilled and honored to be able to debut my woman-loving Mimi alongside David’s sassy and sexy man-loving Mathieu and finally share this transformative journey with the queer ladies and gents of Toronto.

That’s right, TO. Mimi and Mathieu are here and they’re Queer. 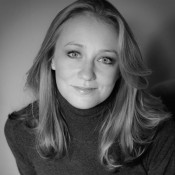 Julie is a film, television and theatre actor/improviser, born and raised in Calgary, AB. As an improviser, Julie has appeared in the North American tour of Rebecca Northan’s award winning one woman improvised clown show, Blind Date, appearing as “Mimi”.

Read all posts by Julie Orton